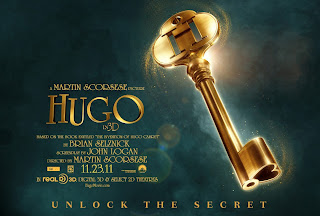 Film, directed by Martin Scorcese
Based on the book, The Invention of Hugo Cabret by Brian Selznick


Hugo is a truly enchanting movie, it tells the story of Hugo, an orphan who secretly lives in Montparnasse station, keeping the clocks running. His spare time is spent in trying to fix an automaton his late father was fixing before his death.


I don't want to give away the plot, because it is wonderfully exciting witnessing the solving of the mysteries, but I love the inclusion of events from the history of cinema and the work of 'cinemagician' Georges Méliès.

I had only ever seen Méliès film, A Trip To the Moon, (Le Voyage Dans Le Lune), and that was a very long time ago. Apparently he made over 800 films, and I would love to see some more of them. He was known as a 'cinemagician' for his amazing and magical films.


This movie reminds us of the magic that cinema can achieve, and why we must treasure that and not just cast it away. I think it was an appropriate film for Scorcese to make, as this message should rightly come from a director who has a real passion for cinema. Scorcese began directing films during a period of time when young directors were using radically different styles to reinvent film, (The documentary, Easy Riders, Raging Bulls covers the American New Wave, if you are interested, you should see it. Also the documentary, No Subtitles Necesscary: Laszlo and Vilmos), Scorcese's career and early production company were destroyed for a time when the movie THX118, the first production of his company, was too ahead of the time and was hated by executives. Of course, he came back eventually from his setbacks and is now recognised for his talents. Having experienced these kind of trials first hand, he is in a unique position to understand the trials and imaginative magic of Méliès.


All of this historical information aside, this is just a wonderful movie, sweet, clever and very heartwarming. I would recommend it to people of all ages!


Oh, and I also loved that they played Danse Macabre in it.


The picture on the video is by Remedios Varo, who I did this post on last year. She is a wonderful surrealist artist!
Posted by Laura Morrigan at 23:05