The Dreams of Others 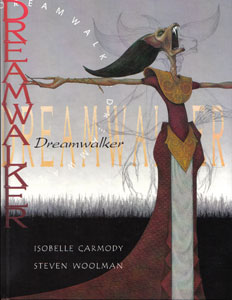 
Dreamless is a free online web comic about Elanor and Takashi. Born on opposite sides of the world on the same day, when they sleep, they never dream, but instead see each other's lives in real time. They form an unshakeable bond, but their strangeness of their situation and the impending war threaten their relationship.

This is a fairly short online comic, and I read it last night. I loved the idea of being connected to someone else and seeing their life instead of your own dreams. There is so much I want to say about the clever plot and concepts, but I don't want to ruin the story for you and it is quite short. Suffice to say that as it is a free online comic, you should definitely read it! There are also other online comics you can read on this site through the 'select a spot!' bar in the top right hand corner. I haven't had time to check any others out yet.

Dreamwalker, by Isobelle Carmody is the story of Ken, an teenage insomniac and aspiring graphic novellist who is transported in his dreams to another world. At first Ken thinks this is just the world of his dream, which he has created, but then he begins to realise that,  no matter who created who, this world is no less real than his own, and both he and the people of his dream are in real danger.

In  Dreamwalker, Carmody and Woolman have created a fascinating otherworld, filled with anthropomorphic cat people, an evil sorceress, and an underground world of caverns. The story is also short but engrossing.

Both are presented in a lush visual style, Dreamwalker as a picture book for slightly older readers with black and white and colour on black intensely realistic sketches, Dreamless as graphic novel panels painted in beautiful three dimensional art that appears to be done in gouache paint. Both are a real pleasure to read and look at and highly recommended.