White Is For Witching 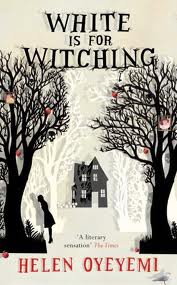 Novel by Helen Oyeyemi
White is For Witching is a story told from many viewpoints by many characters, but mostly it is the story of Miranda Silver. Her disappearance is an open secret throughout the story, that begins with her disappearance and then goes back in time, recalling through her point of view and that of others that knew and loved her, the circumstances that led to it.

This is a story that interweaves dark magical legends with human frailty, to create a lushly written and very engrossing narrative. I finished it in three days, barely able to put it down, except when my eyes got too tired. All of the characters intrigued me, each being unique, and feeling like a real person to me. Many of them had those fascinating little quirks you find in people that are so enchanting. The house itself was a character, which was very interesting. It sounds a bit silly to say it, but believe me, it really works in the story!

Miranda suffers from an illness called Pika, which is passed on through the female line of her family. It is a hunger to eat items that are not food. Therefore, she craves things like plastic, dirt and chalk. Chalk is her especial favourite. Her addiction to these foods forms an important part of this dark and moody narrative.

I really can't talk too much about the plot, because there are so many things you should discover for yourself. Helen Oyeyemi is a truly talented author, and this book was a true delight to read!

I can't find a website for Helen, but here is a short bio in her own words from the White Is For Witching webpage:

"I grew up in Deptford, South-East London, where the Elizabethan poet Christopher Marlowe was stabbed to death in a pub. There was also a church with a very detailed carving called 'The Valley of the Dry Bones' by the master carver Grinling Gibbons. There were also plague pits, and a tree that could be used to summon the shade of John Evelyn (around and around and 'John Evelyn' ninety-nine times). I've always liked stories, but best of all are the ones about battles undertaken out of ordinary sight - battles all the scarier and all the fiercer because only the people fighting them understand what's at stake: The Snow Queen, and also Marianne Dreams, about a girl who finds it harder and harder to wake from sleep as the sense of menace in her dreams increases...

I love Emily Dickinson's writing. She said her poems were songs caused by fear. I like Dracula because the first time I read it it took away my courage to fall asleep for a whole week. And its different narrators made me think about monstrosity and wonder what it could mean. I liked The Golem too, because it asks what a person does when they discover themselves to be a monster.
In 2006 I graduated from university, and that summer I did some volunteering in South Africa, where I caught flu and spent a lot of time in a dark-ish room with no Internet, feverishly rereading Dracula. After all that I began to write this book. I hope you like it.
Helen Oyeyemi"
Posted by Laura Morrigan at 21:22