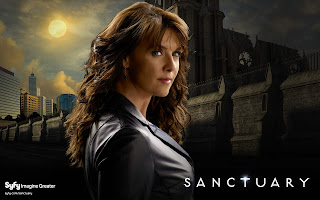 I always liked Helen Magnus from the series Sanctuary. She is a woman you can look up to and aspire to be more like. She is a woman who kicks ass. She never needs a man to tell her what to do, she's in control and she does things most people could never dream of doing. She is always armed with countless knives and guns and ready for a fight. She is over 100 years old and looks great, but never feels a need to flaunt herself in revealing costumes for the pleasure of the audience, wearing chic dresses and jackets around the office, and cool leather jackets and boots in the field.

She was unlucky in love but didn't let it hold her back, continuing with her life's work and dedicating her life to protecting 'abnormals' (amazing creatures like dragons, werewolves ["HAPs"] and 'Bigfoot') from the world.

Then I discovered Amanda Tapping who plays Helen Magnums is also an executive producer and director of three episodes for the show. I was blown away with a huge rush of admiration for this woman. In the entertainment industry is still a male dominated area, not to mention that it has been shown that most TV shows are still slated towards a male audience, hence the large amount of 'T & A' a lot of modern TV shows still show.

I love my female heroes, but I get a bit sick of seeing them dressed down to entertain male audiences. I think it is also a little insulting to audiences to assume that they need to see semi-naked females to keep them interested, especially in the realm of science fiction and fantasy, where people mostly want to see interesting storyline. Anyway, this is one of the reasons I love the show. Apart from that, it's just a nice twist on the genre with mythical type creatures given a scientific twist, using science to explain their existence, while also using more classic fantasy/ horror elements such as the vampire blood that gave them their extended lifespan. I also like the smattering of Steampunk technologies such as some of Tesla's inventions.

I don't want to reveal too many secrets about the show, but this is really a great show to watch if you're looking for some more intelligent and exciting entertainment.