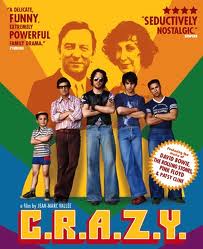 Film, (France, 2005)
C.R.A.Z.Y. is the story of the Beaulieu family, but in particular, the story of the third son, Zac. Born not breathing, but then resuscitated, he is his mother's "miracle" child, especially as he was bron on Christmas day, sharing the same birthday as Jesus. (Although, if you know a bit about history, you will know Jesus' birthday was actually moved to Christmas and was originally another date.) As the years go by, Zac is sensitive and struggles with life. He goes from his father's favourite to disappointment. This is painful for Zac, who worships his father. The movie follow the family and Zac's struggles through the years.

Marc-Andre Grondin, who plays Zac convincingly portrays the aching uncertainty of adolescence and trying to discover who you are, while dealing with the painful knowledge that your parent cannot accept you for who you are. He is also very easy on the eyes ;)

This film is a really touching and exciting movie that refused to deal in a simple Hollywood type simple ending, but rather delivered a veritable feast of emotions and plot twists that had me completely intrigued. It is a movie everyone should see!
Posted by Laura Morrigan at 02:04