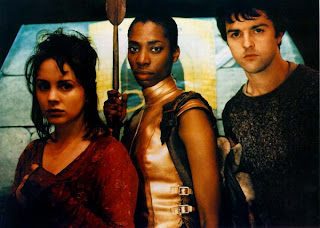 Television miniseries by Neil Gaiman
If you are a Neil Gaiman fan, you may have read Neverwhere, but perhaps you have not heard of the miniseries. I gather it isn't that well known outside of Britain.

Neverwhere, by Neil Gaiman is the story of an ordinary man who discovers there is another world below London, a clever, humorous and intriguing reinvention of places and ideas about the city of London. There are actually three incarnations available, the original novel, the graphic novel and the television series. Interestingly, apparently the television series came first and was re-edited to become the novel.

I have two of these, the graphic novel and the television series. They both tell the story a little differently, but are both wonderful in their different ways. The only thing I would say is not the experience the two in too close succession as it can lead to comparison, and that is never fun.

As well as being great to watch, the television series has a wonderful aesthetic, with some truly beautiful settings, and kind of punk grunge inspired outfits. (Please forgive my failure to properly describe clothing styles, I love clothing but I never learned any terminologies.)

The IMDb link for more information because you should totally try and watch it!
http://www.imdb.com/title/tt0115288/
Posted by Laura Morrigan at 12:26