Go The F**k To Sleep 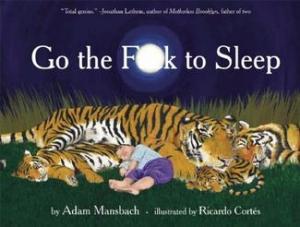 Picture book, Adam Mansbach & Ricardo Cortes
Remember all those cutesy books that were read to you as a kid with cute little animals and babies going to sleep?
Well, this isn't one of them.
Anyway, I think these images should give you a pretty good idea of what it's about. It's a pretty amusing read, and I think people who have young kids will really get what it's about. Apparently Mansbach started writing the book when his daughter was two and taking two hours to get to sleep. He posted a joking note on Facebook saying, "Look out for my upcoming children's book, "Go the ____ to sleep". His friends were so enthusiastic, he decided to actually write the book. There has been an outstanding reaction to the book, frustrated parents who often dare not talk about the exhausting job of parenting for fear of being judged really identify with the events of the story.
Apparently there is also an audiobook read by Samuel L. Jackson. 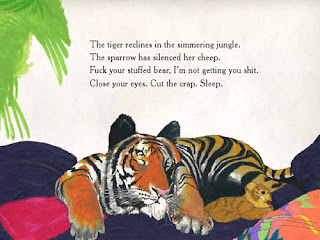 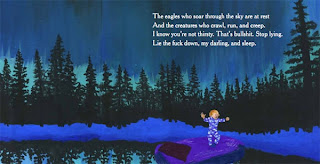