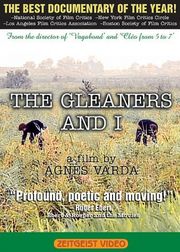 Documentary film by Agnes Varda
The Gleaners and I (Les Glaneurs et la Glaneuse) by Agnes Varda is an award winning documentary that makes us realise the amount of food that really gets wasted while some people are starving! She also discovers artistic gleaners, artists and creative people, including herself, who use found objects and stories to make art.

The documentary follows director Agnes Varda as she explores the modern versions of the age old practice of gleaning. Gleaning in the old days usually referred to women collecting leftover stalks of grain after the harvest was over. Nowadays, people still glean, although it refers to a wide range of crops. Some do it because they can't bear the wastage, some to survive.

We see potato farmers dumping whole loads of potatoes in fields to go bad because they are not suitable to sell. They are perfectly fine except that they are too small, too big or funny shaped. Varda was especially taken with the heart shaped ones and had to film them. After being left like this for a few days, the potatoes go bad, and are then no use to anyone.

Other kinds of gleaners included a 2 Michelin star chef who picks a lot of his own produce, dumpster divers and people who visit markets after hours and take leftover produce, which is a similar practice.

If you are not familiar with dumpster diving, or the term isn't used where you live (technically it wasn't used in the documentary, but that's what we call it around here) this is what it is.

Basically, when fruit and veg near their use by date or are imperfect they are often put in large produce bins out the back of shops. In many areas, these bins are fairly hygenic and you can pick the produce back out, wash it and eat it. It is also possible to do this with packaged goods. I actually know people who have done dumpster diving, and they are totally normal people, except that they spend less on their groceries than we do.

It horrifies me to see how much food goes to waste before it even turns up in the supermarket dumpster, when there are people in the world who are going hungry! It was nice to see that some farmers, such as one of the apple farmers in the documentary allowed gleaners or 'pickers' to take the spare fruit that wasn't going to be sold, but I find it sad and wasteful when others, like the potato farmers, dump spare produce in random spots, where most people are unlikely to find them.

This documentary really make us think about waste, and the way we live.

Also, Agnes Varda is entirely adorable, and her cute little side trips into her own imagination, such as the scene where she traps trucks with her hand while driving down the highway and the dance of the lense cap were so funny and sweet. I also liked the short bit about Etienne-Jules Marey, film and photography pioneer, who in a fascinating coincidence was the one time owner of a vineyard she visited. It was fascinating how she branched into a different kind of gleaners, artists who used found objects, and herself, as a gleaner of images and stories. I loved the junk towers the old man built!
Posted by Laura Morrigan at 20:01