I really want this book! Unfortunately there's no time to order it for Halloween! 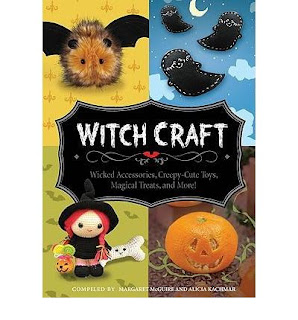 (I'm not affliated with either of these, they are just the cheapest and best online bookstores I know. If you know any other good ones let me know.)

I love witchy stuff, but I hate misrepresentation of witches as evil. At it's best, it's insulting to pagans and wiccans everywhere, at it's worst it stems from a symbolic need to pull down strong and powerful women.

My outfit today is actually inspired by The Craft, which is one of the few mainstream movies that deals with witchcraft in a positive light, although most of the girls do go astray with their powers later on. Other good ones include Practical Magic and The Mists of Avalon, which is really more pagan, but it's about powerful women and a reading of Arthurian legend from a female point of view, so every woman should really read it!

Anyway, this outfit is inspired by some of the outfits the girls wore in the movie to school. They went to a Catholic (or some kind of Christian) school, but the four main girls were witches. Nancy Downs always wore a lot of crosses and things as part of her Goth aesthetic. You can't really see in the pictures but the sleeveless jumper thing flowed really nicely when I walked, it looked pretty dramatic.

If you can possibly find this not very well known movie, grab it! Dead And Breakfast is a zombie movie with a difference, kind of tongue in cheek, with songs, and humour and the awesome Jeremy Sisto and a cameo from total legend, David Carradine. It sounds kind of silly when you describe it, but believe me, it is a total blast!

Shaun of the Dead is also pretty funny.

Land of The Dead

The most intelligent and well written of zombie movies I have seen to date. After the zombie apocalypse, the rich all live in a closed off city seemingly safe from zombies, while the poor are left to fend for themselves. Groups of bounty hunters are paid to go around slaughtering zombies. But it seems the zombies are gaining intelligence and beginning to learn...

With a cast including the very talented and versatile John Leguziamo, the beautiful Asia Argento and charming Simon Baker, and the late great Dennis Hopper, this movie is both clever and totally gripping. I loved it, and it scared me.

Although apparently other people weren't as scared as me. Am I the only person who is scared of zombies?

However if this isn't scary enough...

Scary and gross and totally horrific. Not for anyone with a weak stomach. I could varely sit through them and had really creepy nightmares!

While Coppola added in a bit of romance, I still feel that this is true to the original story, and it is both visually dark and romantic and creepy. I could watch this again and again. Also Tom Waits has a cameo in this, what's not to like?

Another movie with Jeremy Sisto in it. Gotta love the guy for his movie choices!

May is an outsider who thanks to a lazy eye as a kid, has always been isolated. Now she tries to form relationships, but everyone screws her over. So she decides to make a friend...

May is so sweet and quirky, I love her. And totally feel for her. It's not really scary, but it's a great movie! This is one you need to see!

“So many pretty parts and no pretty wholes.”

Pan's Labyrinth and The Devil's Backbone

Director Guillermo del Toro is an amazing director! Both these movies are creepy and weave fantasy or supernatural events into the horrors of the Spanish civil war, through the experience of children! These are amazing movies, and while they are not the most Halloweeny, they are definetly must sees. If you haven't seen them, just make sure you see them sometime!

The Nightmare Before Christmas

Technically this is really a Christmas movie, but with a plot set in Halloween town and songs to sing along with such as Halloween town, this is also a pretty fun movie for Halloween!

Even though I don't agree with the negative portrayal of witches in this movie, this movie by Italian horror great Dario Argento is one of the most creepy and also beautiful horror movies I have ever seen. With strange music, fascinating sets, like a wall that is reminiscent of MC Escher, a room with painted flowers and lattice on the wall, an underground tunnel with black lace patterns on the walls, and a frightening chase scene in darkness with red lighting that ends in a teeth gritting final shot. I have never been so visually stimulated by a horror movie. The creepy shadow outside the sleeping area is also a great shot. But I don't want to give too much away.

I also really want to see his movie Phenomena, but like a lot of his movies, it's not too easy to find around here.

My favourite song from The Craft:

Also this song, because Kate Bush is awesome!