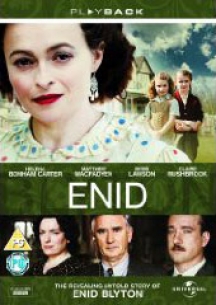 ENID, also known as ENID BLYTON is a 1999 BBC teledrama about the life of prolific children's author Enid Blyton, whose works still sell today. Far from being the happy soul that you might assume her to be, this film reveals a portrait of a damaged child-woman, who desperately tries to find happiness, while being sincerely dedicated to providing the escapism of stories to children everywhere.
From the crushing blow of her father's abandonment at a young age, and her mother's fragile world, to leaving home early and her determination to be an author and a mother, Enid's world seems to mostly be little patches of light amongst much sadness. Marriage and motherhood are not what she thought they would be, and her father is to her, still the paragon of manhood, fuelled only by scattered childhood memories. Whenever she is sad, she retreats into a fantasy world, and her books come from this place.
Enid's childish delight in winning at games, eating jelly and flirting with men shows she never grew up and show an innocent, petulant spirit. She is a true child woman, and doesn’t mean to hurt anyone. She longs for the father who left her who formed her childhood world, and understands children because she still is one at heart, but as a child, is unable to deal with her own children. She finds it difficult to live in her era, often finding adult society boring and hating the harsh realities of the war, preferring to live in the innocent ordered worlds of her books.
She is fanatically dedicated to her writing, setting herself a rule of 6000 words a day and often writing up to 23 books a year. She refers to the children she writes for and meets as her friends, and connects better with them than she does with adults. Even though she seems selfish I identify with her because it is hard to be different in a society that values conformity, and I have known other child women, and know they can't help the way they are.
Enid is a bright, intelligent woman who gets around wartime paper rationing by having her books published by six different publishers, seeming desperate to give the children 'something comforting, something they can rely on.' It's almost as if she is trying to mend her own childhood wounds by giving these stories to the children of the world. I can also understand the way she cuts herself off from her family and the wounds of her childhood and unhappy relationship with her mother. I think there is a part of all of us that is trying to escape the sadnesses in our childhoods, and I can understand it. I feel as if, although I can understand it, the film does not try to explain it, and only lets Helena Bonham Carter's understated acting tell the tale, and I am not sure that all the viewers will understand what is behind it. I think you really have to know the different types of people in the world to be able to understand Enid Blyton and what it is that drives her.
Enid yearns to break free of her mother's world of 'strangulated respectability.' She often does not fit with society, or care what they think. While it seems cruel, she is unable to connect with her brothers because of their connection to her mother and the pain those memories bring her. In the scene after she sends her brother away, it is clear that she is racked with emotional pain and has no idea how to deal with it. She is running so hard from her past, desperate for it never to catch up with her. 'Different world, different girl' she says. She has built herself a new world, and cannot bear to have her reality shattered.
When, after her unborn son's death she writes Noddy and then places the little Noddy figurine by the picture of her two daughters indicates a deep love for her children and a grief at this child never having been a part of her family.
The film does not show much of her decline into dementia, but the last scene, where we suspect the beginnings of it, and she is left alone in a room by herself after the children she has read to are gone is poignant in itself.
This is a beautiful movie. It is not a movie that everyone understands, as some of the reviews on IMDb show, but I think it is a wonderful insight into a confused and difficult woman, that tries to get to the heart of the misery and personality that made her life so unhappy, despite the happiness that she gave to others.
Posted by Laura Morrigan at 05:43