BOOK VS MOVIE: THE WITCHES OF EASTWICK 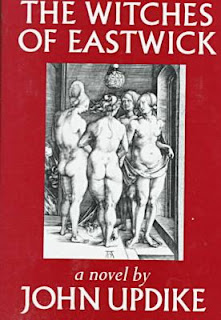 The book, the Witches of Eastwick, by the late John Updike is a divine and grotesque work that reflects both the power and the frailty within women. With a rare ability to depict believable female characters not just physically and mentally, but spiritually as well, John Updike weaves a painfully honest work about three women who have magical powers, powers that they have used to transform their husbands into a place mat, sand and I can't remember the last one.
Sukie, Alexandra, and Jane are three women in a little town who all have lovers, but long for something more. When the eccentric and somewhat off-putting Daryl Van Horne moves into the run down old house on the hill, they are fascinated with him, and soon become his lovers. These are powerful women, in touch with their bodies, they sensualities, although they are not physically perfect, like the women in the film, they are much more themselves and in control of themselves. While some criticisms of the book seem to indicate that the book also degrades the women, I think it is a prudish point of view to assume that because the women are sexually open and willing to sleep with Darryl, that they are degraded, rather than taking control.
The film, in comparison, portrays them as weak, pathetic women who go to a man that treats them terribly and insults them, because they have nothing better to do. In the book they enjoy their relationship with Darryl, both social and sexual.
In the film, their powers also seem to come from Darryl, seemingly having not existed before he came to town. The book strongly gives the notion that there is power within us all, and, despite depressing bits and human weakness, it gave me a sense of empowerment. The movie made me feel sick and disgusted, and I felt that it had been rewritten by a chauvinist, it made me feel he kind of felt women were dirt. Also look how the movie ends, the women all have babies. Is this meant to be anew beginning? I’m so sick of movies ending with women having babies. It's a terrible ending! Why is it that movies always seem to think that having a baby after all the terrible things that happen in a book is a happy ending, especially when the women are left all alone. And especially as, in this movie, the children are the sons of Satan.
The book ends with the women eventually finding their new husbands and finding happiness. The only dark thing the women do in the book is murdering their rival, Darryl's wife, which is a disturbing part of the book, but, in the end, gels well with the rest of the story, because it is about power vs frailty, the strength within us vs our all too human weaknesses, our need for love and affection. For some reason, when there are three lovers, all friends, it works, but the other woman somehow edges them out.
I also thought the climax of the movie once again centres it too much around Darryl as if, once again, it was all about the man, not the women. The movie seemed very much centered around Van Horne, instead of the women's lives and how he affected them. I know a movie 'needs' an epic climax, but the ironic twist of the book, where, once the wife is dead, he runs away with her brother has clever and unexpected, and I think suited the character and the narrative. In the end, this was a movie that really lost the plot. The sexy, overblown TV series from 2009 came much closer to the book in spirit than this dismal and somewhat chauvinistic movie.
In conclusion, I feel that the original book by John Updike explores the concept of women's power, and spirituality, while the movie does not. What are your thoughts?
Another opinion, from Time Magazine
http://www.time.com/time/magazine/article/0,9171,954320,00.html
Posted by Laura Morrigan at 04:36