ARE SUPERHEROES SEXIST: The Truth About Women In Comics

I'm working on a short list of female empowering films, hopefully to be posted, soon. Meanwhile, this article is amazing!!!

It's a defence of the sexist claims about comic book characters being sexist and exploitative, very well researched and written. It's nice to see an article with a pro-feminist view on comics as possibly empowering to women! 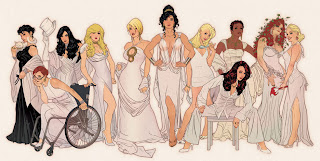 "Sexism in comics is not at all a new portrayal. The fantasy playground for generations of men since the late 1930′s, comics have seen women go through various incarnations whether it be: Scantily clad crime fighting vixens, plucky gal reporters, subconsciously over-sexual  Amazons, seductive villainesses, spunky teen side-kicks or strong feminine role models – the list goes on and not to everybodies approval.
And it’s hard to dismiss claims that women have been stereotyped, objectified and at times degraded over the history of comics. And while we enter into a new era of a more inclusive bull penn of writers with a more layered approach to female characters, the old ghosts of sexist past still linger on many a comics page and the issue is far from being put to bed.
I’m not going to judge the way those characters were portrayed on here, but what I am going to do is provide you with is both sides of the argument. So below without further ado are some points on the existence of sexism in comics, what’s being done to amend things and where the accusers have simply and got it wrong ..."


FOLLOW THE  TO LINK FOR THE FULL  ARTICLE. :) IT REALLY IS WORTH THE EFFORT!
Posted by Laura Morrigan at 03:24