Something Wicked This Way Comes

Book by Ray Bradbury and 1983 Film 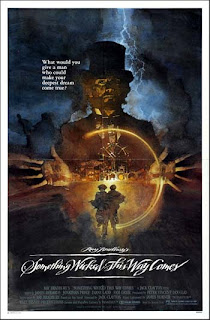 (Image source: http://www.soundtrackcollector.com)
Something Wicked This Way Comes is, at it's heart, a book about childhood, about growing up, and about growing old. Will Holloway is a young boy with an old father. While Jim and Will run around having youthful adventures, Will's father Charles dreams of his youth, and reads books about adventures. Jim, on the other hand, dreams of growing up, while Will just doesn't want to be left behind. One autumn, a carnival comes to town, which is strange, because it's not the season for the carnivals. but this isn't just any carnival, this is a different kind of carnival, with dark magic and a sinister motive.

Bradbury's lush and chilling narrative blurs the lines between magic and reality, everything is so tangible and real, and we can easily believe in the magic and dark secrets of this sinister carnival and the enchantingly evil Mr Dark. We too, find ourselves drawn in, wanting to know more, experience more, even though we know the danger involved. It is a book that, like Bradbury's Dandelion Wine, reminds us of the bittersweet magic of childhood. Charles' story is also touching and moving to those terrified of growing old, who can recognise that spark of youth still within us.

There is also a movie (made in 1983), which I believe is quite hard to find these days. I once read that the movie bombed when it came out because it was too scary for children, but not adult enough for adults. That saddened me as it is an amazing movie! There have been changes made for dramatic reasons, but none of them in any way detract from the original feeling of the book. Jason Robards is wonderful as Charles Holloway, and Jonothan Pryce has a wonderful dark maganetism as Mr. Dark, making the air of danger and magic he gives palpable, and explaining why Will is drawn to him by the darkness within us all. But there is also light and strength within us, as Charles Holloway proves.

Both the movie and the book are well worth experiencing. I am not saying that we should just watch things online, but if you can't find the movie anywhere else, look on YouTube. I think it's kind of ok to watch things on YouTube if the companies that own the rights to things refuse to let us actually get hold of the DVDs.
Posted by Laura Morrigan at 01:29