"ORACLE IS STRONGER THAN BATGIRL WILL EVER BE": Disabled Superheroes 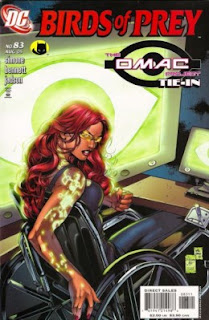 (Image: http://dc.wikia.com/wiki/Barbara_Gordon_(New_Earth)
In the article ORACLE Is Stronger Than BATGIRL Will Ever Be, Jill Pantozzi offers a touching and convincing insight into the need for superheroes to represent all kinds of people, including the disabled. After Barbara Gordon was shot in the back by The Joker (in The Killing Joke by Alan Moore, I assume, as I remember this happening when I read it) she became wheelchair bound. However, after this, she learned to fight crime from her wheelchair. I didn't actually know this, and I think this is a wonderful way to show that people can go on fighting, that just because you are disabled doesn't mean you can't fight for what you believe in!

In the article, the author, who suffers from muscular dystrophy tells how inspiring it is to have a superhero who is also stuck in a wheelchair, but is disappointed that apparently Barbara Gordon will no longer be the superhero Oracle.

What does this say about our attitude to things, if, in books and comics, when things get too hard, we just change the story? Maybe this won't happen, and Barbara Gordon will continue as Oracle. I hope so. Even though I have only just heard of the character, I think she sounds inspiring, and I would love for a character like her to continue to exist!

Read the original article, it is wonderfully and honestly written. And maybe take a second to think what we are doing as a society to allow differently abled people to participate in society as easily as the rest of us.

Barbara Gordon on Wikia
Posted by Laura Morrigan at 06:36