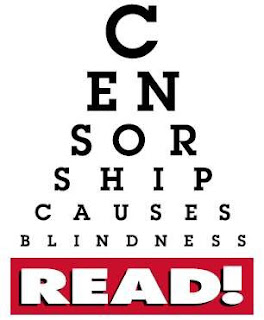 I just found out it's Banned Books Week! Banned Books Week goes from September 24th- October 1st and was created to highlight the problems of banning books. Here is some information from the official page:

To celebrate Banned Books Week, readers are being invited to make a two minute video of themselves reading from a banned or challenged book and put it up on a special YouTube channel.

If you want to check out some of the banned books, there are a couple of lists from the America Library Association (ALA)

To most of us, the idea of someone telling us what we can read and see is ludicrous, but that is exactly why we need to make sure that people cannot do this. No one has the right to decide a book should not be read because they don't agree with the values in the book, or don't think we are mature enough to cope with them! Look at all the books we take for granted being able to read that are on the banned and challenged classics list: The Great Gatsby, To Kill A Mockingbird, Of Mice and Men, The Lord of the Rings! Seriously, The Lord of The Rings!

It doesn't have to be this week, but pick up one of these books and read it, and think about why it was banned and how stupid it was that it was banned! Embrace your literary freedom!
Posted by Laura Morrigan at 02:28